With 2016 coming to an end, we would like to take a closer look at the current proceedings against our revolutionary friends in prison.

Sometimes, the frenetic rhythm of counter-information with all of its frequent updates or the repetition of slogans can cause us to lose sight of our analytical capacity and critique that as insurrectionaries and anti-authoritarians characterize us. Within the continual counter-information movement, we would like to pause and provide a brief overview into the reality of the judicial proceedings against our revolutionary prisoners.

We are glad to see Gabriel’s release to the streets, Albert Woodfox and the slow release of Marco Camenish.

With the memory of our fallen comrades in combat still fresh, we remember that those in prison don’t enjoy dead time, vacations, or recreation as do gendarmes and the managers of prison society. Our craving for revolt and liberation will not rest either. 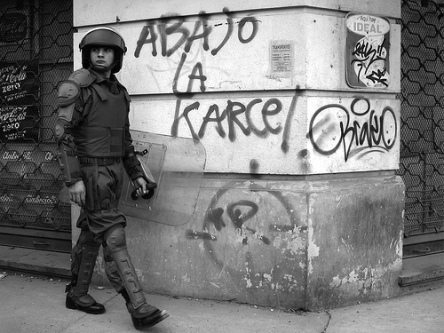 Our friends Francisco Solar and Mónica Caballero, who where detained in November of 2013 and accused of planting the explosive devices and bombing against the Basilica of Pilar, have faced a segregated and isolated prison sentence. They finally had a trail in March of 2016 and were sentenced to 12 years in prison. This past October, their sentence was substantially reduced to 4 and a half years with the possibility of being sent back to Chile.

Hans Niemeyer, arrested on the November 30th of 2011 and sentenced to 5 years + 300 days for the explosive attack on a BCI bank, is still imprisoned in a maximum security prison without the penitentiary benefits due to the impossibility of the bureaucratic gendarmerie.

Kevin Garrido and Joaquín Cortez arrested in November of 2015 and accused of different explosive attacks. Both are being held under a gun control law. Joaquín is accused of the attack against the 12th precinct of San Miguel and then of illegal possession of a gun after being caught with one following months of hiding after breaking his house arrest. For his part, Kevin is being charged with the attack against the school of gendarmerie in San Bernardo, possession of a weapon, black powder, and an attack against Chilectra (October 2015).

The investigations into the case are still open and ongoing.

Tamara Sol Farias Vergara, arrested in January of 2014 and accused of shooting a bank security guard in revenge for the death of anarchist Sebastia Oversluij, continues to serve a 7 year sentence for the attempted homicide. Tamara is currently in the special maximum security section of the San Joaquin prison.

Comrades Juan Flores, Enrique Guzman and Nataly Casanova are accused of attacking police substations and precincts during 2014, actions later claimed by the Conspiracy of Cells of Fire – Chile and The International Conspiracy for Revenge, continue to remain in preventive custody.

On the judicial side, the investigative process is being lead by prosecutor’s office under the anti-terrorist law that asks for 10 years to life imprisonment, with the investigation period almost over and then continuing to the preparation for oral trail whose date is currently waiting to be set.

The prison situation for the comrades are:

Juan Flores: Prisoner in C block of the ex-penitentiary.

Nataly Casanova: Prisoner in the prison of San Miguel.

At the end of 2014, the homicide brigade of the PDI were attacked with incendiary bombs by hooded ones and due to this Victor Amaru Zuñiga, Felipe Roman, Manuel Espinoza, Maria Paz Vera, and Natalia Alvarado were arrested and prosecuted.

After the conclusion of the initial investigation, they currently preparing for oral trail since November 28th, 2016, with the prosecution requesting around 20 years for each.

The prison situation of the friends are:

Maria Paz Vera: Prisoner in the prison of San Miguel.

After being condemned in 2014 for the bank robberies and the death of a policeman, friends Marcelo Villarroel, Juan Aliste and Freddy Fuentevilla are serving their sentences in a maximum security prison.

Marcelo Villarroel: Sentenced to 14 years + 40 years (for a previous sentence)

Feddy Fuentevilla: Sentenced to 15 years in prison, but because of a 2016 reform to the law, it was reduced to 14 years, 4 months.

The friend Ignacio Muñoz, accused of transporting an explosive device in August of 2015 in the municipality of Lo Prado along with pamphlets expressing solidarity with the prisoners of the PDI Case. He has been sentenced to 3 years and one day under the gun control law. He is currently in the prison of Santiago 1.

Natalia Collado (Tato) and Javier Pino have been sentenced to 3 years and one day for the incendiary attack against a Transantiago bus in April of 2015. Tato is in special High Security section of the San Joaquin prison, while Javier Pine is in prison at Colina II.

The friend Nicolás Rojas, accused of the arson attack against the Church of San Francisco in October of 2015 continues to be held in maximum security, while the initial investigation is on-going.

Fabián Duran arrested and accused of carrying molotov cocktails on September 11th, of 2015 continues to be held within the maximum security section, with the deadline for initial investigations still open.

For the destruction of prison, the jailers, and the society that supports it!

For the liberation of revolutionary comrades in prison!